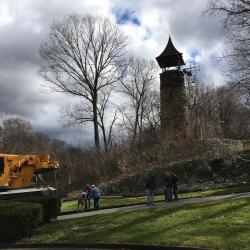 But first, the bell tower's 6,500-pound, 8-foot rustic framework and 14-foot pyramid-style roof, installed more than 130 years ago, had to be brought down in a delicate operation using a huge crane.

The rebuilt roof structure and bell will be back up in August, with a re-dedication planned for September, officials said.

The bell, created by Cincinnati-based Buckeye Bell Foundry in 1880, is being restored with an electronic striker, by Verdin Bells & Clocks, also of Cincinnati.

A century ago, the bell was rung at at 6 p.m. each day when the cemetery closed its gates. It provided the death knell for every Akron funeral in the late 1800s. By the early 1900s customs had changed and the bell was silent except for special commemorations, such as the end of World War I.

In 1930, an electrically operated bell system was installed, and the bell resumed for special occasions until the clapper was stolen in the 1980s.

Once restored, which Akron events the bell will toll for is still under discussion, officials said.

As for the bell's framework, workshops are  planned for this summer to enable  skilled timber framers to come to Glendale to participate in the restoration.

The $300,000 project is a collaboration between the Friends of Historic Glendale Cemetery and ARRC Inc., the for-profit historic restoration arm of Stan Hywet Hall & Gardens, which is managing construction.

Area businesses, foundations and individuals have contributed to the project and donations are still being accepted, said Glendale Cemetery trustee Cheri Cunningham.

Akron's Braun & Steidl Architects developed the restoration plans, which include restoring the tower's heavy timber bell and roof support structure, the roof framing and roof, the platform at the top of the tower and the bell itself.

The new framework for the bell will be authentic to the original structure, made of white oak, which strengthens with age, Cunningham said. A synthetic version of the original slate tiles will cover the roof.

LED lighting will be positioned at the top of the tower, while floodlights will illuminate the stone structure from below, said Donald Funk, of Braun & Steidl.

The tower stands on a small ivy-covered hillside, known long ago as Ordnance Hill, at the main entrance to the cemetery. The hill will be cleared and landscaped with a pathway so the public can have a closer view of the tower.

Originally designed by Akron architect Frank O. Weary, the 64-foot tall tower took three months to build in 1883. The lower 40 feet of the bell tower is made of Peninsula stone, which was hand-cut by stone mason Alfred W. Barnes, who served as the general contractor.

The tower was designed to complement the cemetery's Gothic Civil War Memorial Chapel, which opened in 1876 and was restored in 2003 by Braun & Steidl. The bell tower, memorial chapel, caretaker's lodge and cemetery office are all listed on the National Register of Historic Places.

Glendale was once used for more than funerals. With its ponds and park-like setting families often picnicked there, or took walks and carriage rides.

The project's organizers encourage residents to visit the cemetery to follow the project through the spring and summer. Glendale Cemetery is located at 150 Glendale Avenue, near downtown Akron.