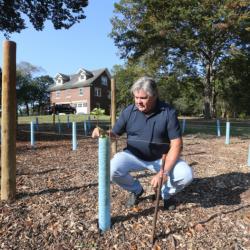 NEW FRANKLIN — An estate built from a frankfurter and sausage fortune is up for a national honor.

The Ohio Historic Site Preservation Advisory Board is recommending that the Zimmerly property at 4332 Manchester Road be added to the National Register of Historic Places.

The massive, brick colonial and carriage house were built between 1919 and 1921 and are associated with the Swiss-born Zimmerly family, which started selling frankfurters and sausage by horse and buggy around Akron in 1891.

Today, the home and carriage house are being restored and renovated by owners Jim and Julie Pulk, who are turning the property into Prime Vine, which will include a vineyard, wine tasting room and events space.

“Our intention is to make it a pleasant property that people can enjoy,” Jim Pulk, 62, whose business interests include the Bricco Prime restaurant across the street, Illumetek Corp. in Cuyahoga Falls and Venture Wines in Napa, Calif., said Wednesday during a tour. “It’s never going to be a money-maker, obviously.”

ARRC put together the application for the National Register designation.

The state noted that the house was designed by local architect and contractor Clifford B. Ferguson and “is an example of the Colonial Revival style popular in the 1910s.”

The three-story, nearly 7,000-square-foot mansion, which sits off the road and has a tree-lined driveway, still has its original floors, plaster walls, woodwork and wooden doors. There’s also 9-foot ceilings, large bedrooms, separate staircase for the servants, four fireplaces and multiple sun rooms.

But it’s not the house itself that is driving the potential historic designation. It’s the Zimmerly family’s contributions to the community, said Emily Crawford, a restoration associate with ARRC.

The Zimmerly Brothers Co. — there were brothers John, Jacob, Gottlieb and Herman — blossomed into a regional meatpacker, and at one time was the only meat plant in Akron’s Kenmore neighborhood. (The company was sold in 1947.)

The family built its home on a 12-acre estate that was shared by the brothers and their sisters Louise and Ida.

The Pulks are only the third owners of the property.

They bought it for $330,000 at an auction in October 2015 and Jim Pulk, who grew up in nearby Coventry Township and was familiar with the property, estimates that they are investing nearly $1 million in getting the winery started and for renovations such as adding air conditioning and bathrooms.

At the end of the renovations, there will be seven bedrooms and 10 bathrooms.

“It was in amazing condition but just uncared for,” Pulk said. “If you look at the brick, there’s not a crack in the brick any place or anything like that. It’s an amazing piece of property.”

Pulk admitted that he wasn’t sure what they would do with the property when they first bought it.

“We were sort of like the dog that caught the car,” he said. “We had to figure out what the heck we were going to do. What we sort of envision is, yes, we’re going to have an operating winery but it’s not going to be overkill. It’s going to be very low key.”

The property will be available for special events such as weddings and while it won’t operate as a bed and breakfast, there will be the potential for guests to stay there.

They have planted four varietals of grapes, including St. Croix. The Pulks don’t expect to produce wine from their own harvest for several years.

But Pulk noted that the tasting room will initially include his Venture Wines from California.

In addition to wine, he wants to launch a distillery and produce apple bourbon with apples from the orchard and cognac from the grapes.

They also want to farm the property and grow herbs and other ingredients in the greenhouse to bring a farm-to-table element to the menu at Bricco Prime.

Pulk hopes the house will open to the public in the spring. He said the home will likely be named the “Zimmerly House” to honor of its past.

He supports the National Register designation so the property is protected in the future.

The Pulks bought the entire estate, but there was the potential at the time to split the land into separate parcels for additional housing.

The state recently forwarded its recommendation on the Zimmerly property, along with four others, to the Keeper of the National Register, who directs the program for the U.S. Department of the Interior.

The other Ohio properties nominated are: the Duttenhofer Building in Cincinnati, Main Theatre in Mount Healthy, the downtown commercial historic district in Sandusky and the Anthony Wayne shipwreck near Vermilion in Lake Erie.

The state expects to hear a decision in about 90 days.

The National Register is made up of more than 90,000 listings, which include single properties, landmarks and historic districts.

Find this article, video, and addtional photos at: