One stone at a time, workers re-create past at Akron’s Stan Hywet Hall 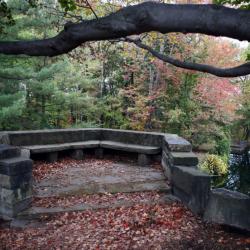 Time had taken its toll on the Hidden Aspect.

Erosion and the natural progression of seasonal freezes and thaws, decade after decade, forced the folks at Stan Hywet Hall & Gardens to close off the stone overlook some 15 years ago.

The walled-in area, constructed from large rocks shortly after the Seiberling family took up residence in 1915, was pulling itself apart, in danger of toppling from its perch into the lagoon some 25 feet below on the estate’s northwest corner.

Back in the early days, Goodyear co-founder F.A. Seiberling’s family would sit on stone benches on the overlook and contemplate the issues of the day or enjoy a picnic and admire the Cuyahoga Valley off in the distance.

But it has sat hidden for years, closed to the public.

An ambitious project to restore the Hidden Aspect and the celebrated Tea Houses a stone’s throw away, along with the cliff base they rest upon, is changing all that.

Workers have been toiling daily for months to shore up the cliff and ensure it will be around for another 100 years.

Zach Goebelt, owner of COI Stonework in Akron, said they have been using a historic photograph snapped in 1916 as a guide to help restore the cliff to what it looked like then.

Working on historical projects can be tricky, and there are rewards.

He points to “Buddy,” the crew’s mascot. Shaped like a dog, the small plastic toy was found tucked inside a stone crevice on another project on the property, and has been their companion ever since.

“We found a rotted chisel once, but that wasn’t worth saving,” he said.

Goebelt said the goal is to make it look like they — and other restoration workers over the years — were never there.

This has meant removing some previous patch jobs along the cliff base and using the photograph to re-create the way it looked originally.

They have even removed some 175 tons of dirt and other natural debris that had collected along its base over the last 100 years. Instead of a sloping surface leading to the cliff face, the area below is now relatively flat — just like it was when F.A. and Gertrude Seiberling strode the grounds and perhaps discussed the state of affairs at Goodyear Tire & Rubber Co.

Cracks had developed in the bedrock — some extending 8 feet deep — so before the work even started, a geologist was brought in to assess the cliff and create a 3-D map, to ensure whatever had to be done to stabilize the cliff would be repaired and restored to the way the family’s landscape architect intended.

Goebelt said the Hidden Aspect was sturdy enough when it was first constructed, but there were some issues that needed to be addressed, particularly where the original workers placed the cornerstones.

There were drainage problems that allowed water to collect, and over time, the freeze and thaw allowed the rocks to succumb to gravity and pull some 8 inches away from the cliff.

One troublesome crack in the overlook, Goebelt said, extended the length of the structure, up and down the cliff base and 4 feet deep.

To correct the problems and shore up the overlook, workers had to painstakingly remove each of the layered rocks that make up the Hidden Aspect, one at time.

This proved to be a tricky task, Goebelt said, because two enormous trees sit on either side of the stone feature that could not be disturbed. Workers wrapped padding around the branches and trunks to keep them from harm. Wooden planks were used to protect the roots.

Instead of using a crane or other large equipment, Goebelt said, they had to use a “ridiculously” tiny excavator and rollers to move the stone blocks and pieces — some that weighed as much as 1,700 pounds — one at a time onto a conveyor belt to be moved out of the way.

“They went back exactly where they were before,” he said.

Getting it just right

The overarching goal of this project — like others in the modern era of the grand estate — is to restore the look to what it was like when the Seiberling family first walked through the front door.

That’s why workers rely on historic photos, Gilles said, to make sure they get it just right.

The cliff project is interesting historically because the overlook was one of the driving factors that led the family to pick the property in the first place.

It was once home to two quarries (“Stan Hywet” is Old English for “stone quarry”), and this is how the cliff face and lagoons came to be.

This side of the property was home to the Akron White Sand and Stone Co. Quarry in the 1890s that mined silica sand for glass and fire brick manufacturing in Akron and beyond. When the mine closed, it left huge gouges in the earth.

Instead of seeing a negative, Gilles said, the family saw potential.

“They saw these scars as pluses instead of scars,” he said.

They created steps down to the mined areas, planted gardens and created pools of water to eventually swim in.

These pools also were used to help drain rainwater from the estate. There is a gate at the lowest pool that could be opened and drain all the water from the gardens in an emergency; as far as anyone knows, it has never been opened.

The lagoons served a practical purpose.

At the base of the Hidden Aspect, near the bridge, is an odd rusty-looking steel rod protruding from the ground. This was an important feature, Gilles said, in an age when fire claimed many grand mansions.

“This marks where the fire hydrant was,” he said. There were other such primitive hydrants on other parts of the grounds.

The edge of the quarry created man-made cliffs where the Hidden Overlook and Tea House were constructed. This created vistas for the landscape architect to plot places where the family and guests could enjoy unobstructed views of the forests below in the Cuyahoga Valley.

Looking at what is now the national park off in the distance, Gilles surmises this is the very view John Frederick Seiberling Jr. saw as a child growing up at the estate.

Gilles said this vista may have planted the seed that inspired the longtime congressman to work tirelessly to establish what would become the Cuyahoga Valley National Park.

“You could look over the whole valley from here,” he said. “And that’s why the Seiberlings wanted to build here.”

The goal now is to re-create that view for future generations to enjoy. So some trees are being removed and others are being relocated.

This means other obtrusive trees will remain. There are a number of them on the edge of the estate that block the view of modern structures, like the Timber Top Apartments.

Some other trees will go over time, Gilles said, like the rows of tall pines that stand like giant soldiers atop the cliff. Although they seem like they have been there forever, they were never part of the original landscape plans.

When the efforts began in the 1950s to open the estate to the public, Gilles said, city fathers felt a fence should be built on top of the cliff to ensure no one falls off of it. As a compromise, small pine trees were planted.

These once tiny trees now tower high in the sky and simply are not historically accurate.

The same goes for some plants and trees in the lower lagoons, where guests gather for special events like Shakespeare plays in the summer, and peer down to see festive displays during Deck the Hall.

“We want to give our guests a sense of what it looked like when the Seiberlings lived here,” he said. “We want them to see what they saw.”

Find this article, video, and addtional photos at: