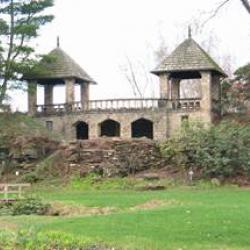 A gift from a local foundation will allow Stan Hywet Hall & Gardens' visitors to take in a view of the Cuyahoga Valley that's been denied them for a decade.

The $500,000 grant from the Mary S. and David C. Corbin Foundation will to used in part to restore the Hidden Aspect, an outdoor patio overlooking a lagoon on the Stan Hywet property and the Cuyahoga Valley beyond. The money will also fund restoration of the twin Tea Houses, which flank the lagoon overtook at the end of the Birch Tree Allee.

"Both the Hidden Aspect and the Tea Houses are built of sandstone, which is deteriorating," said Gailmarie Fort, vice president of outreach and communications for the historical estate. The houses are still safe for visitors, she said, but the Hidden Aspect was deemed too unstable for use.

'We've been monitoring and measuring them year by year," she said.

Even Fort and other staff members at Stan Hywet have never visited the Hidden Aspect, which is north of the Tea Houses and curves to face the Cuyahoga Valley. It has been closed since 2004 and isn't visible from the rest of the estate, she said.

The Hidden Aspect was a favorite picnic spot of the family of F .A. and Gertrude Seiberling, the Goodyear co-founder and his wife who built Stan Hywet a century ago.

The Tea Houses are garden pavilions flanking the Birch Tree Allee Vista, an overlook that's a favorite spot for bridal parties. The houses were intended to serve as a place to rest and enjoy the view or seek shelter in bad weather.

Fort said Stan Hywet's architect, Mark Gilles, will work with geology students from the University of Akron and Kent State University to assess all three structures and determne what needs to be done to shore them up.

The gift is part of a $6 million capital campaign that Stan Hywet has been pursuing quietly but hasn't announced publicly, Fort said. Money raised by the campaign would also fund work on the perimeter stone wall and on leaded glass 'Nindows in the Manor House, carriage House and Gate Lodge, as well as a room-by-room restoration of the Manor House.

Work on the Tea Houses and the Hidden Aspect will begin once all the money has been confirmed, Fort said. No timeline has been set.