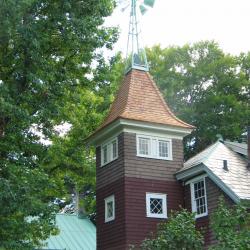 Workers removed the windmill from the Wash House on the Perkins Stone Mansion grounds Wednesday.
The process, which involved carefully cutting seven bolts that were holding the windmill in place took about an hour and a half.

Employees from Ty Powers Construction took the windmill off, while YJ Drkers from Johnny's Crane Service used a crane to hoist it down. Stan Hywet's architectural restoration company will work on restoring the windmill, with the help of Beville Sandblasting and Coatings, which will remove the old paint from the windmill.

The Wash House dates back to 1890, but the windmill currently on the structure isn't the original.The existing windmill was on the Wash House when the Summit County Historical Society bought the property in 1945, said Leianne Heppner, the society's president and CEO.

In addition to the windmill being restored, the asphalt roof of the Wash House will be removed and replaced with a wood shake shingle roof, which is the type that was on the structure when it was first built.

The work on the roof and the windmill is expected to take about five weeks.

The $25,000 project is being funded with a grant from the Mary S. and David C. Corbin Foundation, Heppner said.

The work on the Wash House is part of a larger $100,000 project to improve the Perkins Mansion grounds in preparation for Akron's 2025 bicentennial. The project includes repainting the mansion, a process that has already begun.

The Perkins Stone Mansion was built in 1837 by Colonel Simon Perkins, the son of Akron's founder General Simon Perkins. The mansion is a museum run by the historical society.