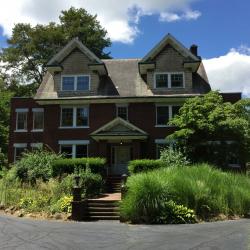 Built between 1919 and 1920, the Zimmerly residence is a large Colonial Revival brick home with detached carriage house is the same style. The interior of the home is designed in the simple Mission style and retains much of the original design and integrity. The Zimmerly Brothers owned and operated a meat market that opened in Akron, Ohio in 1891. The company grew and moved began to pack their own meat. The Zimmerly Brothers became the first meat packers in Summit County to install refrigeration machines to cool the meat in the summer.

ARRC, Inc. reserached and wrote the formal National Register of Historic Pleaces nomination and the property was formally recognized in January 2018.

The current owners are working to renovate the property to operates as a winery. ARRC, Inc. will be providing design services for the addition and patio to the carriage house that will house the tasting rooms, ADA restrooms and equipment.